Spring. That time of year when a boater’s attention happily shifts from months-long concerns about torn shrink wrap and frozen engine block to visions of serene anchorages, picturesque sunsets or landing a trophy striped bass. This spring, some of the new boating electronics can help you experience those visions in vivid and breakthrough ways.

One of the most exciting technologies out there is the new Garmin Panoptix All-Seeing sonar. Introduced in February of this year, this new sonar technology allows boaters to see all around their boats in real time. You can see what’s below you on each side of your vessel as well as forward and aft at any moment, even while you are stationary.

Garmin Marine Sales Director David Dunn describes it this way, “We at Garmin have changed the way you use sonar – this is all new sonar, you’ve never seen anything like this before. This is multi-beam technology with phased ray. We can actually steer our beam;  can you imagine chasing bait and steering your transducer toward the bait so you can see where the bait ball is instead of actually having to drive over it and chase them all morning. Saves fuel, saves time – catch more fish.”

Some of the images Garmin has released to demonstrate the Panoptix All-Seeing sonar are pretty impressive. We’ve always been impressed with the ease-of-use and vivid imagery which seem to go hand-in-hand with Garmin products and the interface and optics with the Panoptix system definitely do not disappoint. 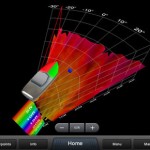 For fishermen, the Panoptix system will certainly be a boon to increasing their catch. The forward transducer provides two impressive views, showing the bottom plus fish and bait swimming in the water column in front of your boat – in real time. You can even see your lure as you reel it in. It will also show 3D views of fish and structure in front of your boat.

Another new and noteworthy introduction from Garmin this season is the GPSMAP 7600 series chartplotter/sonar combos. These systems are designed specifically for boaters demanding high performance, ease of operation and multiple feature integration.

Each product in the 7600 line possesses built-in sonar capabilities build around 1 kW dual CHIRP sonar, some seriously sophisticated sonar technology in its own right, but are also compatible with the Panoptix All-Seeing sonar described above.

Another whizzy aspect of the GPSMAP 7600 series is the Garmin Helm app feature, which allows you to view and control your chartplotter from a smartphone or tablet, allowing better situational awareness. Cooler still is that you can even record a movie of your chartplotter screen to share with friends and family.

But the real “why didn’t someone think of this before” feature is the enhanced SOS Button functionality on some of the 7600 units. If a Garmin VHF radio is connected via NMEA 2000, the SOS button on the GPSMAP 7608 takes you to a list of distress categories such as fire, aground, man overboard, etc. For example, in a sinking situation, the radio would send a DSC distress message with the specific code for sinking, which is something few people know how to do with their DSC radio even in calm circumstances. Possibly more valuable is the displayed script of the proper things to say once the radio goes from DSC to audio mode. If a Garmin AIS is on the network even your boat’s name and call sign will be filled in, and there other screens available to help you manage a problem.

To say the last year has been a bit unusual would be a massive understatement. The level of … END_OF_DOCUMENT_TOKEN_TO_BE_REPLACED

Greetings! Thanks for stopping by our website. I am DG Fitton and Marine Special Products Group, … END_OF_DOCUMENT_TOKEN_TO_BE_REPLACED

Seafood Dining in Connecticut - is there anything more mouthwatering? When you are trapped in your … END_OF_DOCUMENT_TOKEN_TO_BE_REPLACED

Two decades of working with the southern New England boating community has led us to pick up many friends, mentors, and business partners along the way. Many of the people we know, trust, and enjoy working with can be found among these fine groups, guilds, or businesses.