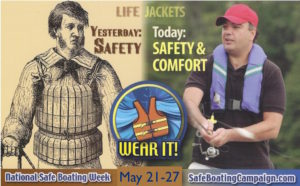 The origins of National Safe Boating Week, slated for May 21-27 this year, can be traced back to a member of the US Coast Guard Auxiliary persuading the town of Amesbury, MA to issue an “Auxiliary Day” proclamation in June of 1949. Three years later, that same Auxiliarist, Steve Sadowski, helped organize a weekend of Courtesy Marine Examinations which was the forerunner to the Vessel Safety Checks now featured during many Safe Boating Weeks.

Soon afterward, the governors of Maine, New Hampshire and Rhode Island joined Massachusetts in providing annual celebrations of the local Coast Guard Auxiliary and boat safety inspections. Momentum picked up in 1956 when the state of Hawaii enlisted local entertainer “Lucky” Luck, who later appeared in episodes of “Hawaii Five-O”, to promote vessel checks and the first Safe Boating Week. In 1957, USCG Auxiliary leadership launched the first nationwide observance of safe boating during the week of June 30 – July 6. The Coast Guard prepared a formal resolution to establish National Safe Boating Week (NSBW), and then convened a committee from industry, yachting groups and the United States Power Squadron (USPS) to promote the resolution. A house bill, sponsored by Representative Charles Chamberlain of Michigan, passed on June 4, 1958. The US Senate modified the bill to include dates covering July 4th, and the first NSBW was kicked off by President Eisenhower’s White House.

Recreational boating boomed in the 1960’s as fiberglass power boats became affordable and water skiing became popular. Initially viewed as reckless and dangerous, the American Water Ski Association joined NSBW to burnish the sport’s tarnished image and to ward off government regulation. The Federal Safe Boating Act of 1971 transformed the boating landscape and introduced funding for the states as well as organizing enforcement activity under the Coast Guard which provided order to this rapidly expanding recreational activity.

The Bicentennial celebration of 1976 marked a transformation for the newly-formed National Safe Boating Committee, which utilized a nationwide tour of historic Tall Ships – OPSAIL, to kick off radio and television programs, safety exhibits, search and rescue demonstrations, parades, open houses, posters, milk cartons and giveaways promoting boating safety. It was during this timeframe that National Safe Boating Week was moved to early June, recognizing that most boats were in the water well before July 4th. Almost two decades later, the National Boating Safety Advisory Council (NBSAC) argued the timi 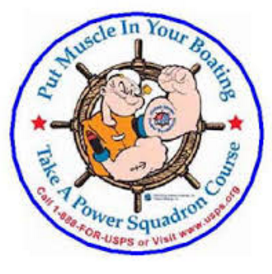 ng should be even earlier and persuaded the Coast Guard in 1993 to designate the first full week before Memorial Day as NSBW.

The first official federal funding for NSBW came about with the passage of the Wallop-Breaux amendment to the Sport Fish Recreation Act. This led the way for some higher-profile promotional activities. For example, in 1987 Popeye the Sailor Man was introduced to the campaign.  In 1998, “Coastie” the robotic boat joined in Auxiliary efforts.

The current NSBW campaign was established in 2003 and focused on the fact that nearly 80% of on-the-water fatalities had one thing in common: the lack of a life jacket. Moreover, studies in 2001 showed that two thirds of all fatal accidents involved a sudden capsizing or fall overboard where merely having a life jacket on board was little help. The message of the current campaign is simple and direct:  Wear It. Most states now have laws directed at children of various ages, and a Federal regulation has been enacted. Those involved in NSBW will provide communications materials, and energize volunteers and safety personnel to spread this simple but important message. All 50 States have adopted the Wear It theme in some capacity, tailoring it to their particular state.

To say the last year has been a bit unusual would be a massive understatement. The level of … END_OF_DOCUMENT_TOKEN_TO_BE_REPLACED

Greetings! Thanks for stopping by our website. I am DG Fitton and Marine Special Products Group, … END_OF_DOCUMENT_TOKEN_TO_BE_REPLACED

Seafood Dining in Connecticut - is there anything more mouthwatering? When you are trapped in your … END_OF_DOCUMENT_TOKEN_TO_BE_REPLACED

Two decades of working with the southern New England boating community has led us to pick up many friends, mentors, and business partners along the way. Many of the people we know, trust, and enjoy working with can be found among these fine groups, guilds, or businesses.